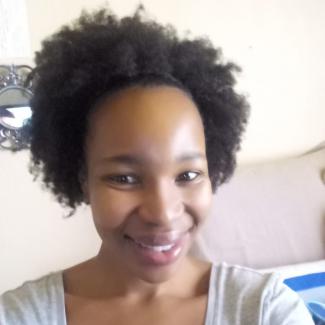 I am the first born of two girls born to a single mother, who allowed us to follow our dreams and make our own mistakes. My dream has always been story telling, to walk in someone else's shoes. I remember sitting infront of our TV glued to mam Nandi Nyembe as she told African tales in a language close to my own (IsiZulu). I loved the physical movement dovetailed into the stories she told, it allowed my imagination to escalate. In high school I was introduced to debating which opened me up to public speaking allowing me comfort infront of an open audience. After high school I took a two year gap year, in the two years I was in Bible College seeking understanding of my spiritual life. The College was also an introduction to theater productions as well as physical movement ( pillaties ). I toured Gauteng & Cape Town for the first time with a production called Job between 2019 & 2010. I had found my passion, stage. So I went & studied acting for camera at City Varsity Cape Town. As a student I spent more time in theater falling in love with legends like tata uJohn Khani, Phamela Nomvethe in nothing but the truth, Authol Fugard in people are living there, Yvette Pelser and her productions to name a few. We often collided with University of Cape Town acting students. We helped with the Cape town film festival, which moved all over the CBD for a week. We also did also did physical movement piece for a club called Trinity in Sea Point. This not only fed my creativity but allowed me to work with other creatives & different energies. My studies were limited to two years instead of the 3year advance diploma when my mother lost her job. Assuming responsibility I went to get a job to help my sister get her degree. Like a first love my passion for drama still has a hold on me. Now that my sister is a qualified accountant, I feel it's time to refocus on storytelling and TV presenting.