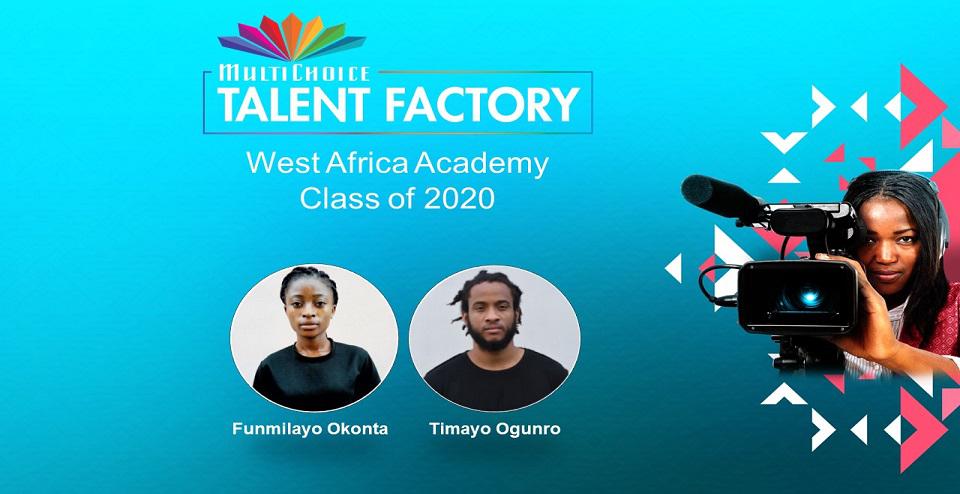 Choosing the set life: Class of 2020 students Timayo Ogunro and Funmilayo Okonta talk about their MTF journey into film and TV production design

What is a film or a TV show without furniture, props or an environment that doesn’t resemble real life?

Everything that appears on a film or TV show from the furniture, scenery, the visual colour palette of each scene and any other set design choices are planned and executed by the production designer. The role requires years of experience, coupled with specialised knowledge. It’s a big undertaking that Nigerian Timayo Ogunro and Funmilayo Okonta are eager to follow through with as part of the MultiChoice Talent Factory (MTF) Academy Class of 2020.

For Funmilayo Okonta, her love for production design started at a young age through art. “Growing up I used to draw a lot. I still do. I love design, I love [creating] out of nothing. That’s where the interest came from. I’m a graphic designer, [too],” Funmilayo explains. With a BA degree in English and Literary Studies, she’s now one step closer towards living her dream as a professional in the creative industry through the MTF Academy programme. Her father has been her biggest supporter, and family support is a crucial aspect especially when embarking on a new journey. So far, Funmilayo’s biggest eye-opener has been the ability to delve into the different disciplines offered by the academy’s holistic curriculum, which deliberately exposes students to the technical, creative and business side of Africa’s creative film and TV industry.

Production design is nevertheless not a popular choice in the industry, and Funmilayo is nevertheless dedicated to being one of the few with the specialised skill. Through the MTF Masterclasses and curriculum immersion internship, Funmilayo has also been able to have the coveted chance of working directly with the people behind the scenes of some of the top TV shows including Brethren and Unbroken. The chance to get hands-on experience in production design has also sealed the deal for her.

“You don’t easily get in contact with people in the industry on a regular day, or when you get to meet them, they are working. [Being at the academy] is a big opportunity to learn from them. It’s a big opportunity to ask them questions: 'why is this done this way?' or 'would it have turned out differently if you had done it [another way]?’” says Funmilayo. She is also passionate about directing, which is another important aspect of her MTF journey, as understanding the world from a production design perspective can greatly contribute to a director’s eye.

Similarly, 27-year-old Timayo Ogunro has always had a passion for the creative industry. Born in Nigeria, Timayo also lived in the United Kingdom for the first ten years of his life before returning to Lagos. “The family that I come from is actually quite creative. My dad owned an advertising agency, my mum [was] a tailor when she was growing up. So, the storytelling and creative aspects just run in my blood basically, but for a long time, I didn’t feel like, when I was younger, I didn’t feel like I was as creative as my siblings or my dad or my mum. But I always knew that I was good with the sciences,” Timayo explains, which is what led him to earn a Master’s degree in Cyber Security.

His father’s passing prompted him to review his life, and finally follow his long-held and deep interest in film, which was additionally inspired by his brother. Alongside production design, Timayo also plans to use his time at the MTF Academy to gain an in-depth understanding of the business of film and TV, and to surround himself with creative thinkers on his journey towards becoming a better writer, director and overall, a compelling storyteller.

“I hope to be able to one day blend the African and western cinema. A lot of you know big brands in entertainment [are] finally seeing Nigeria for the potential she has. Because one thing I believe wholeheartedly as a creator is the best way to tell a story is from your own experiences,” Timayo explains.

Because of the curriculum’s holistic nature, Timayo and Funmilayo have already been thoroughly exposed to various aspects of production design and storytelling for film and TV through their six-week immersive internships on the set of productions such as M-Net hit TV show Tinsel, Africa Magic’s Unbroken and crime thriller Brethren, and the SuperSport studios.

Once done with their internship, Timayo and Funmilayo will be among the many young African storytellers entering the industry with the ability to keep it running, and bolstered their creative, business and technical knowledge from the MTF Academy.