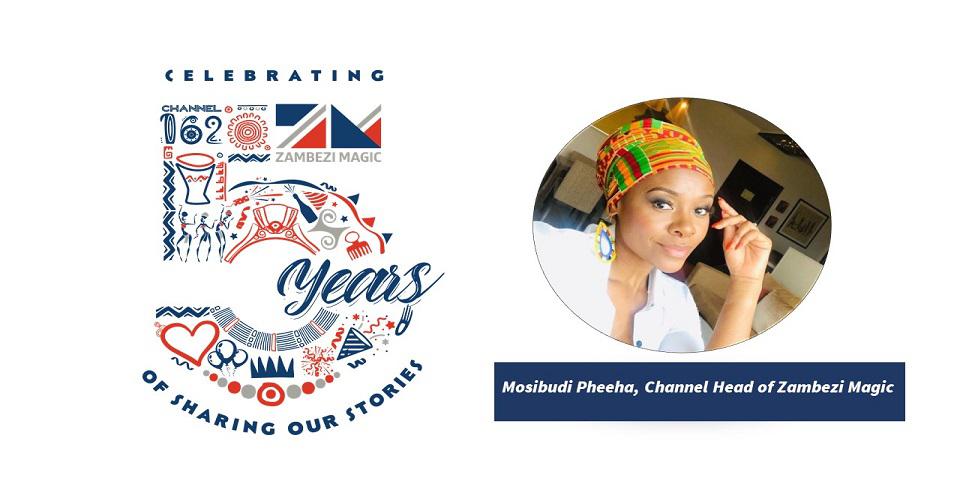 30 June 2020, Lusaka, Zambia. We caught up with Mosibudi Pheeha, Channel Head of Zambezi Magic to get the inside scoop of the 5-year journey of Zambezi Magic and the instrumental role that she has played in ensuring the success of the channel.

“Zambezi Magic launched on the 1st of July 2015 under the leadership of Addiel Dzinoreva, former Channel Head” Pheeha recalled. “With big shoes to fill and determination, I took over the role in 2017 where I assumed the position of Acting Channel Head for Zambezi Magic whilst juggling my current role of Commissioning Editor for the channel” she concluded. The multi-talented force fast proved her way to the top resulting in her being appointed the hot seat of Channel Head on 1 June 2018. The rest is (as they say): History.

Throw back to where it all began

“The channel started off with commissioning and licensing content from Zambia. Who remembers the edgy youth shows like Paya 1 and Nkani Yamu Sisi or the licensed riveting drama- Behind Faces? In addition to this, the channel prided itself with great movies that kept most families glued to their television sets in their living rooms, cultivating the culture of family time in many households around the southern region” said Pheeha.

A game changer and leader of the pack.

“Throughout the past 5 years, the channel has done a complete 360, providing audience with an exciting content mix through the launch of Zuba- Zambia’s first telenovela followed by Mpali which has since proved to be the top favorites amongst the Zambezi Magic audience. The channel has also had the honor of adapting successful formats such as Date My Family in Zambia and Botswana and Our Perfect Wedding Zambia from the sister channel- Mzansi Magic” narrated Pheeha. She further added that the success of these two reality formats gave Zambezi Magic the foundation to fine tune their content based on audience appetite and ultimately launch My Kitchen Party - the channels very own wedding rite of passage celebration format which took viewers by storm! During the interview, Pheeha could not help but laugh when equally citing the introduction of rib cracking comedies like Land Lady Meets Landlord, Lusaka Maids and the most recent addition to the comedy offering, Shi Mumbi. “The objective was to create stories that resonate with audience, young and old” she said. This formula is clearly still relevant to the channel hence its ongoing success and likability across all age groups as well as genders.

Where to from here?

It is not by chance that the channel has survived in the most detrimental economical times. “Our mantra as a channel is: We do not make content only for ourselves, but for our viewers” said Pheeha. We have learned audience behavior and make the necessary tweaks where warranted. "The content team is equally skilled in broadcasting and are therefore always on the lookout for new and fresh stories that can be told in the most honest and authentic voice” she concluded.

Stay glued to your seats in 2020 for new seasons of old-time favorites like the drama series- Ubuntu as well as reality dating show- Date My Family that is guaranteed to keep audience entertained.

The 5-year journey has just begun, join in on the celebration by going onto the Zambezi Magic social media pages @zambezimagictv for a chance to win your share of amazing prizes! Here’s to many more!

Zambezi Magic is a 24-hour general entertainment channel that caters for the Zambian, Zimbabwean, Botswana, Lesotho, Namibian and Malawian audience. The channel has a riveting content mix that includes Telenovela, Drama’s, Realities as well as Comedies.