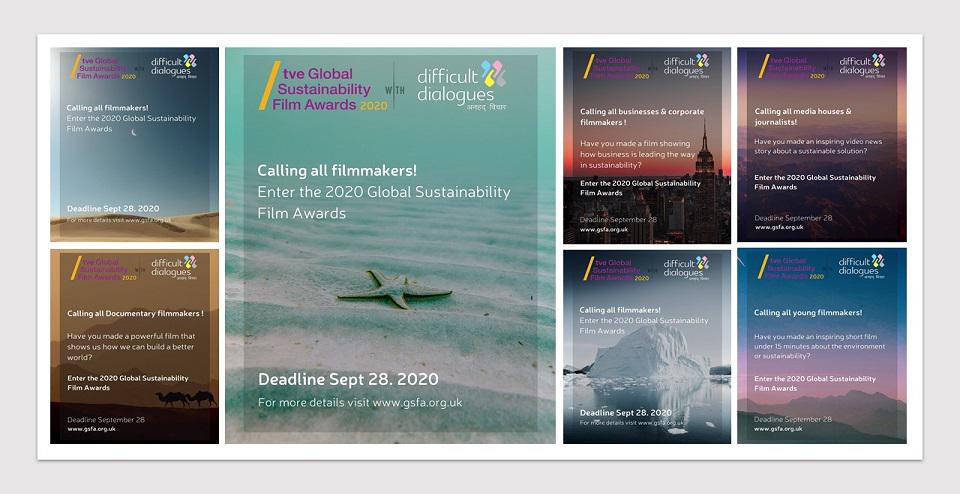 Have you produced an inspiring film about how to build a greener, more just world? Submit your film for the Global Sustainability Film Awards (GSFA) 2020 through FilmFreeway.

The tve Global Sustainability Films Awards (GSFA) recognises outstanding films from the business, non-profit, media and creative sectors that inspire audiences with real-world solutions for a more sustainable future. Now in its ninth year, the awards promote powerful, effective storytelling that helps contribute to the building of a more just and sustainable future.

The Young Filmmaker Award is awarded to the film that brings light to underrepresented voices and issues. Key lessons learned from the winning films will be made publicly available to encourage the sharing of sustainable solutions and impact-driven film communications for the planet.

The Documentary Impact Award is targeted at documentary filmmakers whose film is driving political, corporate, social or individual behaviour change. Key lessons learned from the winning films will be made publicly available to encourage the sharing of sustainable solutions and impact-driven films.

The Doing Business Differently Short Film Award is presented to the film that shows how businesses are improving their supply chain, reducing their carbon emissions, eliminating waste, changing their financial model, or reducing their impact on biodiversity.

The News Story Short Film Award is presented to broadcast or online video news story, that highlights inspiring sustainability solutions. Key lessons learned from the winning films will be made publicly available to encourage the sharing of sustainable solutions and impact-driven film communications for the planet.

The tve Global Film Sustainability Awards is a competition that is open to any company, organisation or individual in any country.

• To be eligible for the tve Global Film Sustainability Award 2020 (GSFA 2020), all entered films must be original and creative productions by or about the participating organization.

• It is the responsibility of all filmmakers submitting titles for inclusion in the tve Global Sustainability Awards to ensure that they have received clearance from the rights holders of all archive film, stills and music used in the film. tve will not be responsible for any rights not cleared in the films that are screened as part of the tve Global Sustainability Awards.

• All films must be entered for one of the nine competitive categories along with the entry fee which are specified in the Categories and Entry Fee section. Entries are eligible for the GSFA 2020 only if entered through the FilmFreeway website along with submission of the online Entry Form and payment of the specified Entry Fee.

• Films entered for all categories should not be of more than 15 minutes duration except for the entries for the Documentary Impact Award category, which is open to feature or broadcast documentaries of at least 30 minutes.

• Entries can only be submitted in English. Films originally made in other languages must be subtitled or dubbed into English. Dialogue lists are not acceptable.

• Films that have had private, unpublicized screenings are also eligible for submission.

• A film that has been entered for the GSFA in a previous year cannot be resubmitted this year.