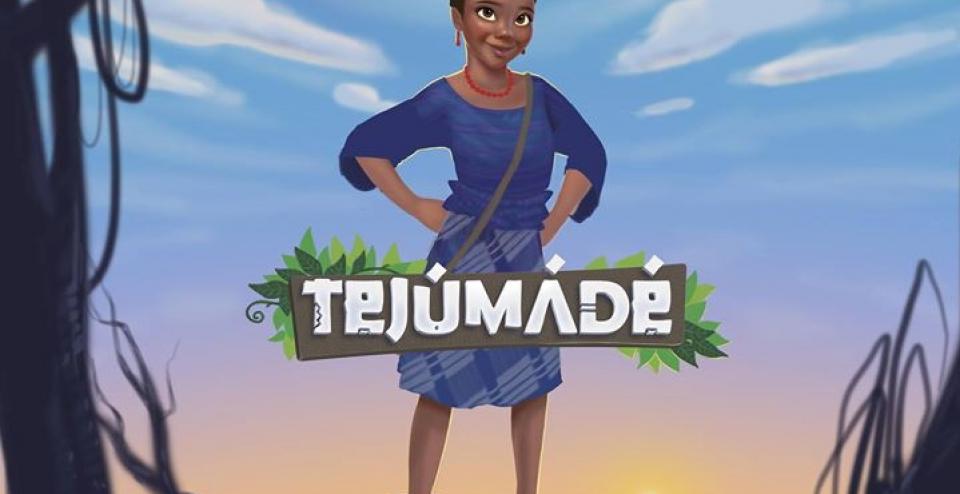 It’s an exciting time to be in animation in Africa. This, according to one of the continent's award-winning animation agencies, Triggerfish. Speaking to Stuart Forrest, chief executive of the Cape Town-based animation studio, he says, “We’ve been delighted to see more and more African animation companies and animators emerging across the continent, with such fresh stories and visuals.” And points to works by production company Sunrise Productions, which has over 1.5-million YouTube subscribers for its animated children’s series Jungle Beat – Munki and Trunk; African animators winning pitches at Annecy International Animated Film Festival in France, such as Ingrid Agbo from Togo who recently ‘secured a pre-sale for her project L'arbre a Palimpseste’, according to Film Contact, and Nigerian-US author Nnedi Okorafor and Kenyan director Wanuri Kahiu whose works are contributing immensely to animation, to name a few of the highlights in the industry.

As Forrest foregrounds the work of agencies and creatives putting Africa’s animation on the map, the achievements of Triggerfish, which has been one of the driving forces for animation across the continent, cannot be overlooked. Championing the industry for almost 25 years, Triggerfish was in 2018 nominated for an Oscar for animated short film Revolting Rhymes and at the end of 2018 launched an animation academy, and made news once again when Netflix announced Mama K’s Team 4, produced by Triggerfish, written by Zambian writer Malenga Mulendema and designed by Cameroonian artist Malcolm Wope, as the streaming service’s first original African animation series.

“There’s never been a better time to work in animation in Africa.” And Forrest is right, this moment indeed marks an exciting and crucial time for animation in Africa, not only seen through the focus on the continent and the output but also, as Forrest says, “the continent’s immense untapped potential for stories”.

Journeying into mastering the craft

Platforms such as YouTube, Showmax and African Animation Network - a network aimed to empower African animation creators and producers by providing support and advancing social cohesion within the African animation sector - are crucial in the accessibility, development and support for African animation. While MultiChoice Talent Factory (MTF), MultiChoice Africa’s social investment programme aimed at empowering young and emerging TV and film makers, is dedicated to nurturing these untapped stories. “One of Africa’s most powerful traits is our stories. And we need to tell them well,” according to Berry Lwando, MTF’s academy director in MTF southern Africa, one of three MTF academies in Africa. “The philosophy of the MTF is to enable the storytelling tradition so that it grows” through MTF’s 12-month academic training programme, which is geared at providing theoretical and hands-on learning to up-and-coming film and TV creators.

Clarence Nyoni, an emerging animator and TV editor from Zambia, who is a student at MTF, says that it is through the internet that his love for animation sprouted, while being at MTF is honing his storytelling skills. Based at the Lusaka academy, Clarence is one of only a few students whose work lies in animation but is aware that the ratio of animators is not a reflection of the industry’s future in Africa.

“Animation is major across the world right now, and I think it’s getting recognised across the continent and beginning to boom. From a continental perspective, we are slowly getting there, and I think that the world is interested in the content from Africa, for example the Annecy International Animation Film Market in France will be spotlighting animation from Africa in 2020.” The emerging filmmaker is referring to the annual animation event’s announcement in June that the focus next year’s festival will be on Africa’s animation industry. According to a Variety article, the announcement ‘marks the latest step forward in Annecy’s growing collaboration with African animators’, and cites its partnership with African Animation Network as one of the many ways its platforming African animation.

Despite the vast progress in animation in Africa, there are still parts of the continent in which the potential of the industry yet to be actualised and access to the industry is limited. For dynamic African animators to continue to thrive, according to Kenyan 2D and 3D animation lecturer Mwara Kung’u, funding is absolutely necessary. Without it, animators run the risk of losing full rights to their intellectual property in order to finish and publicly screen animation, or worse – have their animation remain within the confines of their laptop once completed.

“Finding funding [is] not just an animation problem, it’s a film making problem. It’s so difficult to get funding here, and the result is we’re losing our intellectual property, because the stories are then being funded and being made by people who are not Kenyans,” Kung’u explains. Based in Nairobi, Kung’u has been in animation as a lecturer and creative for over ten years, and is also a senior member at the Association of Animation Artistes Kenya, a Nairobi-based collective that supports Kenyan animators and fosters a creative forum. Intellectual property in animation is a trigger topic for her, because she’s seen its complicated side in action more than once.

Kenya is a hive of creativity both in the animation and gaming space. It should therefore not come as a surprise that East Africa’s biggest comic convention NAICCON, or Nairobi Comic Convention, has been in flux since its start in 2014, and has subsequently become every gaming, sci-fi, comic and film aficionado’s dream. Compared to other East African countries, Kenya’s animation space has a more dominant force, but Tanzania, Uganda and Ethiopia are not far behind, and creative collaborations in the music, film and animation industry are booming.

With computer-generated imagery (CGI) comprising most of contemporary animation, Triggerfish’s Forrest highlights that animation is an industry that serves many sectors, and ensures that skilled animators are in demand. “While many traditional sectors are struggling in Africa, animation is booming – not just in terms of the traditional film industry, but also within fields like advertising, app and web design, architecture, engineering, gaming, industrial design, medicine, and the motor industry, not to mention growth sectors like augmented reality and virtual reality.” As Africa is gearing up for the challenges or possibilities the fourth industrial revolution might bring, there isn’t a more apt time to speak about animation and future creatives. According to a World Economic Forum report, “An estimated 15 to 20 million increasingly well-educated young people are expected to join the African workforce every year for the next three decades.” And adjusting the labour market to the fourth industrial revolution is set to be one of “Sub-Saharan Africa’s defining challenges over the coming years”, as stated by WEF.

Despite the justifiable concern around job creations for future careers and challenges relating to resources for African youth, trend analyst Khumo Teko, in a 2018 report titled ‘Animated Africa - Rising Industry in Africa’, writes, “The African animated sector has seen a growth of start-ups specialising in comics, motion pictures and the gaming sector.” Contextualising the animation industry in Africa, Khumo foregrounds South Africa’s leading developments on the continent but also the progress in animation in other countries. “There has also been a sprout of studios in Zimbabwe with Nafuna TV and Mak Animation, in Egypt with Deadline Studios, Nigerian based Sporedust and Fatboy animations in Nairobi which are contributing to the creation of African animated content,” Theko writes, and acknowledges government initiatives to boost the industry. For example, the Nigerian government, according to Theko, “expressed how the Nigerian government would prioritise the development of its animation and creative industries into new growth sector.”

For Nigerian creative Adebimpe Adebambo, it’s been a 23-year journey to bring her 19-minute experimental, animation short film Tejumade; an extract from a story she plans for a full length animated feature film and a TV series to life in 2017.

“Have you ever sat down and watched the credits at the end of animation films? There might be 50 people just attached to working on several aspects of one character. It takes a whole country make an animation film, because unlike live action, animation is a highly artistic, detailed and technological process,” says Adebambo.

There are exciting movements within Nigeria’s animation space, with a number of full length animated feature films currently in production. Lagos-based Magic Carpet Studios, which focuses on animation, illustration and game development, is riding the wave of interest in this particular creative sector, and channelling it into its plans to create a 2D feature-length animation adaptation of the Cyprian Ekwensi’s 1960s classic novel The Passport of Mallam Ilia.

The Hausa and English language film is set for release in 2020, is one of many instances where stories passed down from generation to generation, whether through fiction or folklore, are being brought to life through animation.

For Nigerian writer and producer Muyiwa Kayode, rooting Nigerian animations in culture and tales passed down from generation to generation is the X Factor that will ultimately set Nigeria’s animation features apart from the rest of the world.

“Watching my kids grow up on foreign animated cartoons and losing their connection with their cultural values motivated me to create an animated series based on African culture and value,” says Kayode.

This prompted him to create The Adventures of Turtle Taido children’s educational series in 2015.  It launched on MultiChoice’s Africa Magic Family channel that year, and in 2016 was the only African entry at the Animation Day in Cannes during the 2016 Cannes Film Festival.

Kayode is also the founder of the Lagos International Festival of Animation (LIFANIMA) which he has been personally running and funding for the past three years. “Having watched Nollywood develop to where it is, I think a similar revolution should take place for animation because it has a stronger potential for telling the African story,” he adds.

This same creative storytelling spirit is alive and well in Ghana, and young animators like Accra-based Natasha Nayo are in the thick of it. “It's amazing! The creative industry [in Ghana] has boomed over the years, opening doors to new forms of art besides painting and graphic design, animation being one of the bigger rises of interest. I know a lot of artists who are learning animation, applying [it] to their jobs, even creating animation team ups with incredible results,” says Nayo, who first began as a self-taught animator in Ghana before studying at the Maryland Institute College of Art in America. She’s one of few Ghanaian animators that was fortunate enough to study the craft as a major, as most of Ghana’s skilled animators are self-taught.

Access to formal training opportunities hasn’t stopped Ghanaian animation studios such as Parables Animation Studios from creating vibrant cartoons and much-loved animated shorts such as Anansi Must Die, and Storytime in Akwaaba, which was aired on local TV in Ghana. Ghanaian artists such as Johnathan Dotse are taking it a step further by experimenting with Virtual Reality (VR). In 2015 Dotse created Pandora, the first 360-degree African VR film. He is also one of the very few African artists experimenting with VR as a medium for telling Africa’s stories.

The spirited work coming from Ghana’s creative industry has no plans of slowing down, and for Nayo, it’s been a long time coming. “Animation isn't new in Ghana but the status quo of accepting it as an important element in the creative industry is a struggle. I’m very proud of how much attention this media is affecting the nation – it just needs a final push for it to be a mainstream occupation,” she says.

As much as animation in Africa is clearly developing, challenges within the field are present, and its animation studios and animators alike are solidifying the industry’s place within the creative economies of Africa. There’s no doubt that African animators are on the cusp of completely transforming the way in which the continent’s stories are told, one digital dimension at a time.